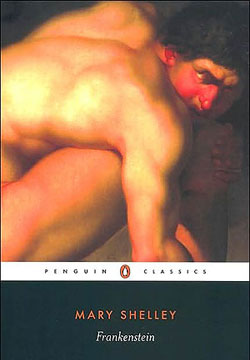 Title: Frankenstein
Author: Mary Shelley
Pages: 265
Genre: Classic, Gothic, Horror, Fantasy
Book Description:
At once a Gothic thriller, a passionate romance, and a cautionary tale about the dangers of science, Frankenstein tells the story of committed science student Victor Frankenstein. Obsessed with discovering the cause of generation and life and bestowing animation upon lifeless matter, Frankenstein assembles a human being from stolen body parts but; upon bringing it to life, he recoils in horror at the creature's hideousness. Tormented by isolation and loneliness, the once-innocent creature turns to evil and unleashes a campaign of murderous revenge against his creator, Frankenstein.

My Opinion:
This is another novel I was advised to read for English but I also wanted to read this myself and boy am I glad I did! When I was reading this I really wasn't expecting what I got from this novel - in a good way!


The main thing that surprised me was the storyline. Before reading this, all I knew was that a scientist created a monster which he lost control of and went round killing everyone. But after reading this I am really surprised at how much more there was to this book than I thought; it's so underestimated! The copy I read was split into 3 volumes, one of which was under the point of view of the monster himself! (The monster isn't called Frankenstein. (Victor) Frankenstein is the name of the man that creates the monster... ) I had no idea this was even in the book so it was really interesting to hear his background and side of the story - as I said, totally unexpected!

Linking to this, I really enjoyed the sub-stories within the main story. For example, the monster's background and his story as well as the sailor's story and his letters at the beginning and end of the novel. And then there's Victor's story which is mainly what the novel is about. This was a lovely touch that I didn't know existed until I read the book...

Another thing I liked about the book was that the English is easier to read than other classics. Because this book wasn't published as late as other classics, the language is relatively modern (there's still a few words I had to look up the definition of) meaning it's a good book for those people that want to get into classics but want an easier novel to start with.

I was recommend this book to literally anyone. If you like gothic/horror genres, read it. If you want to try somethign new, read it. If you're interested in starting classic novels, read it. This is such a well known novel that should be read because it is so underestimated!
There are many film versions of the novel... I've seen the oldest film version and that was a very accurate interpretation but there's a few more modern films too...

If you decide to read this, or have read it, please let me know what you thought! I'd love to hear your opinion :)

Thus ended a day memorable to me: it decided my future destiny.

'Now that I had finished, the beauty of the dream vanished, and breathless horror and disgust filled my heart'

Darkness had no effect upon my fancy and a churchyard was to me merely the receptacle of bodies deprived of life, which, from being the seat of beauty and strength, had become food for the worm.

When you read their writings, life appears to consist in a warm sun and a garden of roses, in the smiles and frowns of a fair enemy, and the fire that consumes your own heart

I do not fear to die

Nothing is more painful to a human mind than, after the feelings have been worked up by a quick succession of events, the dead calmness of inaction and certainty, which follows and deprives the soul both of hope and fear

Our house was the house of mourning

A dream has power to poison sleep

Am I thought to be the only criminal, when all human kind sinned against me?

Next book I'm going to review:
The Bloody Chamber by Angela Carter
Review by Jennie Louise at 5:35 pm