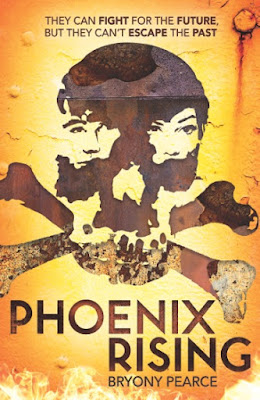 Title: Phoenix Rising
Author: Bryony Pearce
Pages: 368
Genre: Dystopian, Science-Fiction, Young Adult
Book Description:
In a future world where fossil fuels have run out and democracy has collapsed, an outlawed pirate crew fight for survival on their ship, the Phoenix, kept afloat by whatever they can salvage or scavenge on the debris-filled seas. Toby has never known anything other than life onboard the Phoenix and he's desperate for adventure. But when trouble comes hunting the Phoenix down, Toby realizes that what you wish for isn't always what you want. He meets beautiful Ayla from the Banshee, a rival pirate ship and sworn enemy of the Phoenix, and his world is thrown into disorder. How can he know who to trust and what to believe? The future rests on him making an impossible choice... 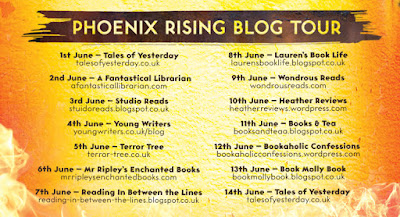 I received a physical copy of this novel from the author and the wonderful people at Little Tiger Press (Stripes publishing) in return for an honest review! I'd like to say a special thanks to them for allowing me to be a part of the tour!

My Opinion:
Phoenix Rising is the first novel in a new series for young adults and I have to say I really enjoyed it! It takes place in an honest and predictable future where society is experiencing political collapse due to the exploitation of fossil fuels.

This novel begins with a fantastic start! I was immediately hooked and full of anticipation. As expected, this remained throughout the novel, with a fast paced action and constant thrill. I really enjoyed this factor.
The ending was amazing and I particularly loved the cliff hanger. Luckily the sequel to this is being published soon so I don't have long to wait to find out what happened to the characters and join them on another adventure, that I'm sure is going to be equally intriguing!

The characters were awesomely written, full of bravery and independence. I felt easily connected to them and really enjoyed seeing how they all developed and changed. Despite it being predictable, I did like the romance featured, which provides something for everyone, not only thrilling action and fighting!
The unexpected twists in the story line kept me on my toes as I was constantly wondering which characters could be trusted!
My favourite had to be Hiko because he was so adorable and strong. He takes on his role very well and reminds me of someones little brother!

Overall, this is a really well-written novel with a strong message about the future of our planet! Being a lover of pirate films, I found this read very enjoyable and it's so good to see pirate novels being written as these are awfully rare! I'd definitely recommend this to young teenagers as it's definitely something I'd have enjoyed at a younger age.
I can't wait for the next novel in the series, released in March 2016!

P.S I'm part of the Banshee Crew; I'd love to know which team you're part of so let me know in the comments!


If you want some kind of simpering damsel in distress, you're looking the wrong direction

Next book I'm going to review:
The Narrow Road to the Deep North by Richard Flanagan
Review by Jennie Louise at 6:06 pm No comments: