The Night Circus by Erin Morgenstern

Title: The Night Circus
Author: Erin Morgenstern
Pages: 490
Genre: Fantasy, Young Adult, Mystery
Book Description:
The circus arrives without warning. No announcements precede it. It is simply there, when yesterday it was not. Within the black-and-white striped canvas tents is an utterly unique experience full of breathtaking amazements. It is called "Le Cirque des Reves," and it is only open at night.But behind the scenes, a fierce competition is underway--a duel between two young magicians, Celia and Marco, who have been trained since childhood expressly for this purpose by their mercurial instructors. Unbeknownst to them, this is a game in which only one can be left standing, and the circus is but the stage for a remarkable battle of imagination and will. Despite themselves, however, Celia and Marco tumble headfirst into love - a deep, magical love that makes the lights flicker and the room grow warm whenever they so much as brush hands.

I have mixed opinions about this book. I did really enjoy it but I didn't manage to get into the plot and characters as quickly as I was hoping. I heard a lot about it and saw many 5 star reviews so I picked it up but I don't think it was as good as everyone said.

So, to get the bad things out of the way, I found it a little slow. I got into it straight away at the beginning and I sped through the ending but the middle, I found, was quite boring. Not much happened and I think it took a while to get down to business with everything.
Secondly, I think I would have enjoyed this if I had read it when I was younger. It's probably aimed at more of a younger audience (12-15year olds probably) and I found a lot of the stuff to not interest me as much. Although I really love fantasy, this didn't meet my expectations.

Anyway, onto the better parts. I really liked the creativity that went into this novel. The details about the circus were really believable and I loved the style of writing. All the characters were really well designed and the overall plot was fantastic.
My favourite part was probably the ending. It had a nice twist to it and it matched the fairy-take-esk genre of the novel with everyone living happily ever after. I also liked how it came back around in a full circle. It was really well written by the author.

Overall I think I would have enjoyed this more if the pace during the middle of the novel was quicker and if I had been younger. I'm late to the party but I'm glad I have read it because it was a really good book, just personally not my style anymore:)


'We cannot feel the bars unless we push against them'

'People see what they wish to see. And in most cases, what they are told that they see'

'The finest of pleasures are always the unexpected ones'

'Most maidens are perfectly capable of rescuing themselves in my experience, at least the ones worth something'

'But dreams have ways of turning into nightmares'

'The most difficult thing to read is time. Maybe because it changes so many things'

Next Book I'm going to Review:
The Melancholy Death of Oyster Boy and Other Stories by Tim Burton

Review by Jennie Louise at 10:07 pm No comments:

The Sleeper and the Spindle by Neil Gaiman

Title: The Sleeper and the Spindle
Author: Neil Gaiman
Pages: 69
Genre: Fairytale, Fantasy, Graphic Novel
Book Description:
A thrillingly reimagined fairy tale from the truly magical combination of author Neil Gaiman and illustrator Chris Riddell – weaving together a sort-of Snow White and an almost Sleeping Beauty with a thread of dark magic, which will hold readers spellbound from start to finish.
On the eve of her wedding, a young queen sets out to rescue a princess from an enchantment. She casts aside her fine wedding clothes, takes her chain mail and her sword and follows her brave dwarf retainers into the tunnels under the mountain towards the sleeping kingdom. This queen will decide her own future – and the princess who needs rescuing is not quite what she seems. Twisting together the familiar and the new, this perfectly delicious, captivating and darkly funny tale shows its creators at the peak of their talents.


My Opinion:
I love a lot of Neil's novels and when I saw this in my local book store I couldn't resist picking it up. The artwork on the cover is so beautiful and I'm a huge fan of Chris Riddell's artwork anyway. This image shows as much justice as possible, but the cover is so much more beautiful in person - the gold is shiny in the light!
I'm also a huge fan of fairytales and when I saw that this linked two of my favourites, I knew I had to get it.

The artwork is the main reason I bought this edition. It's so beautiful and the colour scheme, a simple black, white and gold, is magnificent. I love how the illustrations match the slightly Gothic and creepy story line.

What I love most about this, other than the artwork, is that it has a really interesting ending. It's unexpected and perfect and I really, really liked the twist. All I can say without giving too much away is that it is the complete opposite of your normal and well-known fairytales.

I definitely recommend this book to everyone. It's a short read and it was quite expensive for what it is, but the illustrations and fairytale inspired story are certainly worth it. I'm glad to add this novel to my collection of 'extremely pretty and do not destroy' books!;)


But the path to her death, heartbeat by heartbeat, would be inevitable

Next book I'm going to review:
The Night Circus by Erin Morgenstern
Review by Jennie Louise at 6:51 pm No comments:

The Miniaturist by Jessie Burton 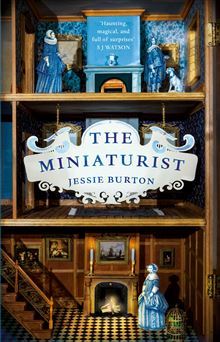 Title: The Miniaturist
Author: Jessie Burton
Pages: 416
Genre: Fantasy, Historical, Mystery, Contemporary
Book Description:
On an autumn day in 1686, eighteen-year-old Nella Oortman knocks at the door of a grand house in the wealthiest quarter of Amsterdam. She has come from the country to begin a new life as the wife of illustrious merchant trader Johannes Brandt, but instead she is met by his sharp-tongued sister, Marin. Only later does Johannes appear and present her with an extraordinary wedding gift: a cabinet-sized replica of their home. It is to be furnished by an elusive miniaturist, whose tiny creations mirror their real-life counterparts in unexpected ways . . .
Nella is at first mystified by the closed world of the Brandt household, but as she uncovers its secrets she realizes the escalating dangers that await them all. Does the miniaturist hold their fate in her hands? And will she be the key to their salvation or the architect of their downfall?

My Opinion:
This book was amazing! I thoroughly enjoyable read that meets all expectations. It was mysterious and creepy and I was always left waning to read on.

As soon as I started reading I was hooked. Throughout the novel I was left in suspense and Jessie did a fabulous job of keeping my intrigued! The mystery was very well inter weaved and I really enjoyed the slow and unexpected revelation that followed.

This brings me onto the plot. Just by the synopsis, I was curious and felt like this was exactly a type of book I would enjoy and boy was I right! The characters were really well written and I especially loved the anonymity of the miniaturist. And to make it better, there were tones of really unexpected twists all throughout the story. The ending was probably the biggest twist because, although the clues were there, I didn't pick up on them and was just gobsmacked. The ending was so good and I'm kinda sad I finished it.

I really, really enjoyed this book and I recommend it to anyone that enjoyed fantasy or novels with lots of mystery. This is not only a YA novel but is perfect for adults as well so I encourage everyone to read it. The main reason I picked it up is because the cover is stunningly beautiful and it's part of Richard and Judy's Book Club!
Overall, this is an amazing book, one I would certainly re-read, and I'm definitely looking forward to reading more novels by Jessie in the future!

If you believe that building is the safer spot, I am not the one to set you free

The bars on your cage are of your own making

'Where is home?'
'I don't know. Where comfort is. And that is hard to find'

In suffering we find out true selves

It is a deceptive quiet, as if the house itself is breathing

Next book I'm going to review:
The Sleeper and the Spindle by Neil Gaiman
Review by Jennie Louise at 2:14 pm 2 comments: