It's Kind of a Funny Story by Ned Vizzini 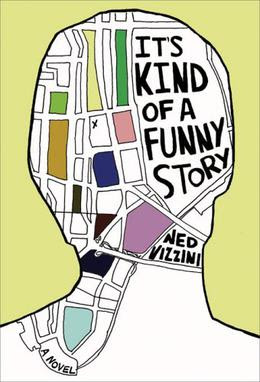 Title: It's Kind of a Funny Story
Author:  Ned Vizzini
Pages: 444
Genre: Young Adult
Book Description:
Ambitious New York City teenager Craig Gilner is determined to succeed at life - which means getting into the right high school to get into the right job. But once Craig aces his way into Manhattan's Executive Pre-Professional High School, the pressure becomes unbearable. He stops eating and sleeping until, one night, he nearly kills himself.
Craig's suicidal episode gets him checked into a mental hospital, where his new neighbors include a transsexual sex addict, a girl who has scarred her own face with scissors, and the self-elected President Armelio. There, Craig is finally able to confront the sources of his anxiety.
Ned Vizzini, who himself spent time in a psychiatric hospital, has created a remarkably moving tale about the sometimes unexpected road to happiness.

My Opinion:
I loved this book! That's it. That's all I have to say. Just kidding!

I was lent this book by a very good friend of mine and she told me 'I just had to read it!' So I did. And can I just say, from reading the blurb, I was hooked. I always find these sorts of books really interesting because it's an insight into someone else's mind, someone with a mental disorder. It allows us to really understand how the author was thinking and how someone in that situation deals with things.

This book is so relatable. Even if you haven't suffered from depression, there will be something in this book that you can relate to. I was able to relate to pretty much the entire story, but others might only be able to relate to a few lines or a paragraph. But that doesn't matter because it isn't any less of a good book if you can't relate...

Another thing I like about this book is that it includes some autobiographical scenes/references. Ned Vizzini suffered from depression and spent a lot of his time in a psychiatric ward. He committed suicide last year. I was so sad to hear he had passed away and couldn't help but cry. He was such a talented man, but I don't think many people know this about the author. I found this so tragic and heartbreaking, as it shows the impact mental illness can leave on an individual and those around them. It's interesting however as it does enforce the realness of the novel as a huge 85% of this came from his own experiences!

It didn't take me long to read this book. There wasn't any sections that I disliked or would have changed because the entire book was perfect!

The last reason why I enjoyed this book so much is because the author didn't romanticize the mental illness. I know this can be easily done but it annoys me because there is nothing romantic about depression... (trust me) I really liked how Ned told his story from the heart. He didn't exaggerate or romanticize anything - he wrote it plain and true.

My favourite character was Bobby because he was so kind and helpful, he just didn't have the esteem to see that in himself. All it took was a few helping hands from his friends for him to realise that he was good enough and he could do anything he set his mind to! (And that's just one of the morals this book provides!)

I recommend this book to any young adults that feel lost or may be dealing with something mentioned in the book. This book is so amazing, I can not tell you this enough.
I think this is one of those books that didn't get enough praise for it's worth... It's a book everyone needs to read at least once in their lifetime.


Favourite Quotes:
There were so many beautiful quotes throughout this book but if I wrote them all down that would basically be the entire book.... So here's a few of my favourites!
I also loved the quote at the end of the novel, but that was too long to write up so I guess you'll just have to read the book to find out ;)


People are screwed up in this world. I'd rather be with someone screwed up and open about it than somebody perfect and ready to explode

I don't owe people anything, and I don't have to talk to them any more than I feel I need to

I'm done with those; regrets are an excuse for people who have failed

There's also a movie based on this novel! I've seen it and I have to say it's a very good adaption to the book. I found that the characters were very well cast, exactly how I imagined them and it was wonderful to see the book come to life on screen! I always prefer reading the books then watching the films!
Here's the trailer to the movie:

Next book I'm going to review:
Pride and Prejudice by Jane Austen