Pages: 404
Genre: Young Adult/ Fantasy
Book Description:
After serving out a year of hard labor in the salt mines of Endovier for her crimes, 18-year-old assassin Celaena Sardothien is dragged before the Crown Prince. Prince Dorian offers her her freedom on one condition: she must act as his champion in a competition to find a new royal assassin. Her opponents are men-thieves and assassins and warriors from across the empire, each sponsored by a member of the king's council. If she beats her opponents in a series of eliminations, she'll serve the kingdom for three years and then be granted her freedom.
Celaena finds her training sessions with the captain of the guard, Westfall, challenging and exhilirating. But she's bored stiff by court life. Things get a little more interesting when the prince starts to show interest in her... but it's the gruff Captain Westfall who seems to understand her best.

Then one of the other contestants turns up dead... quickly followed by another.
Can Celaena figure out who the killer is before she becomes a victim? As the young assassin investigates, her search leads her to discover a greater destiny than she could possibly have imagined.

I was asked by Tika (fANGIRLavue.blogspot.com) to join her and Mallory (mallorybooks.blogspot.com) in a little read-a-long of the Throne of Glass! We've all be wanting to read this book to see what the hype was about and now we've finally done it! Here's what I thought about the book; (you can find what they thought of the book on their blogs!)

Warning
This review does contain a few spoilers so if you haven't read the book I don't advice you to read the review, in case any of the scenes/plot twists are spoiled for you!

As this was a read-a-long there were a set number of chapters to read each day and a discussion topic for each day! Here is the rota: 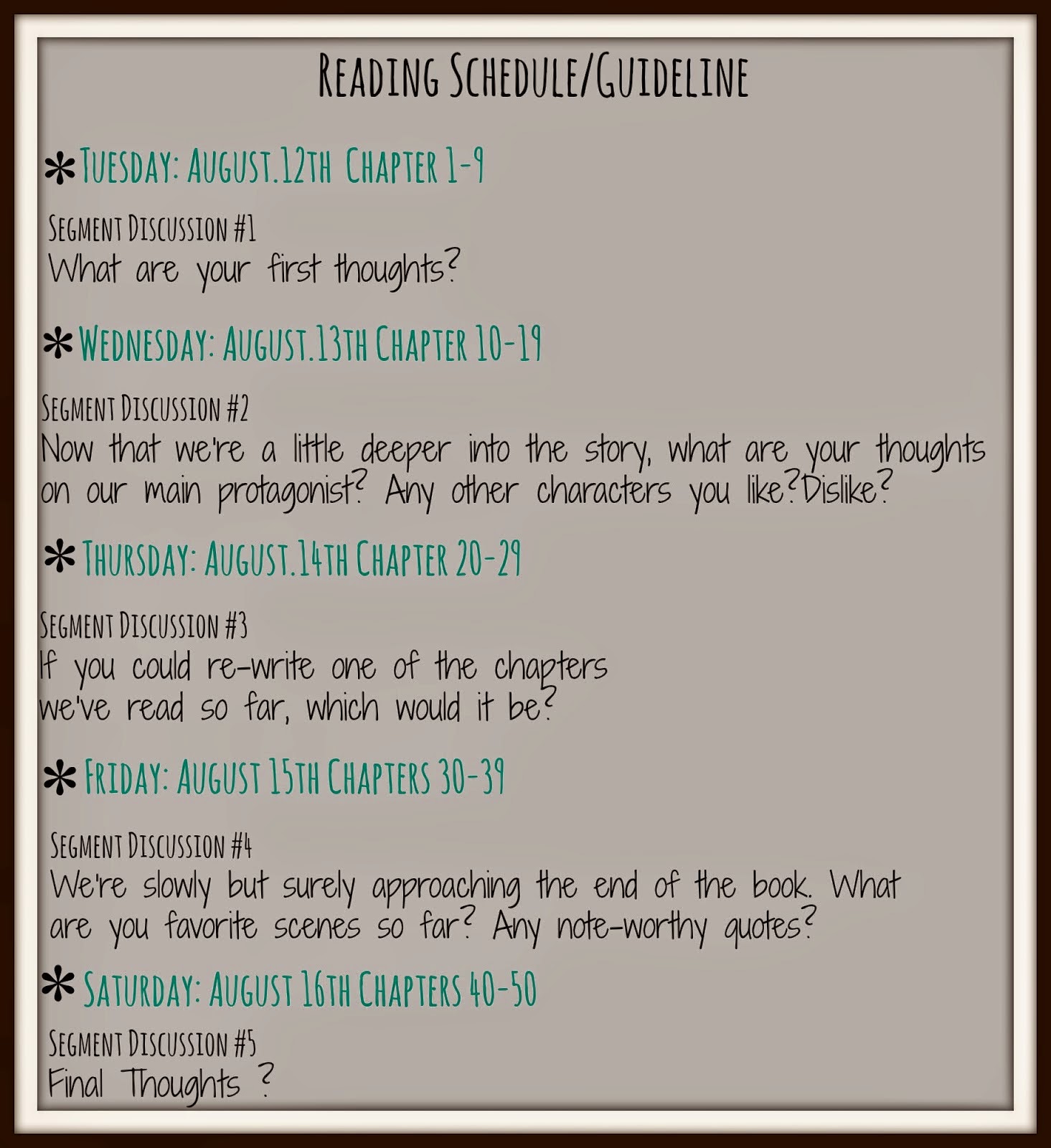 Day 1) I've heard a tone of good things about this book but for me it's not living up to those expectations. The first couple of chapters are intriguing and I do want to read on. Yes the book is off to a good start but I wouldn't say it's amazing. However, this could be because I haven't read any YA books since I was younger so maybe I just have to get back into that sort of style?

Day 2) I really like the main character, Celaena, because she's strong and doesn't give up. And I like the way she pretends not to care about anyone even though we know she does. Plus she's a lover of reading!
Another character I like is Chaol. He's so sweet and cute and genuinely looks out for Celaena.
The only character I really dislike so far is Cain because he's so arrogant!

Day 3) I would rewrite Chapter 26 just because it wasn't as fast-paced as some of the other chapters before it and there wasn't a huge amount that happened. This was  really hard decision because now that the book has got a quicker pace I'm enjoying it a lot more!

Day 4) One of my favourite scenes was when Celaena got candy as a present and ate almost all of it straight away, which made her teeth go red! I love the way this section was written and the reactions of her friends upon seeing the teeth. Another scene I found interesting was the twist at the end of Chapter 35 where Nehemia was discovered doing something she shouldn't be! That was something I wasn't expecting...  I also love the mystery running throughout the book!
And my favourite quotes are below!

Day 5) Honestly, I thought the book was really good! I had heard many amazing things about it and I decided to give it a try. It was slow at the beginning but this only lasted about 15 short chapters. After that I read through the book quickly as it was very fast-paced and exciting! There were many unexpected twists and the characters were fabulous! My favourite was Chaol because he was so kind and gentlemanly! I preferred him to Dorian... Towards the end of the novel there was a very dark scene which I enjoyed. I don't tend to read fantasy novels but this was fantastic and I'm glad there was part of a genre I enjoy incorporated into it.

My Opinion:
I would certainly recommend this book to anyone that loves mystery, fantasy or romance. Personally, I think the beginning was a little slow but altogether the book was a good read!

A lovely girl gazing at the stars, and the stars who gazed back

If she were to die now, it would be in complete bliss

She was surprised that her hands had not forgotten, that somewhere in her mind, after a year of darkness and slavery, music was still alive

While she might be used to darkness, she wasn't foolish enough to trust it

Skeletons danced in circles around her head

Review by Jennie Louise at 7:13 pm