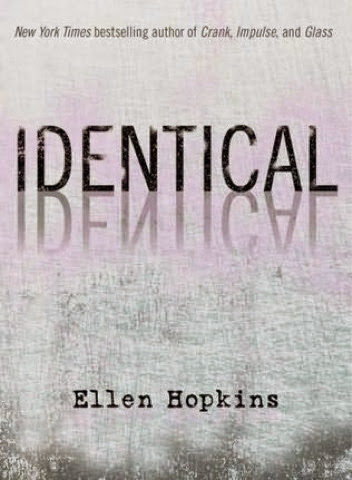 Title: Identical
Author: Ellen Hopkins
Pages: 565
Book Description:
Kayleigh and Raeanne are identical down to the dimple. As daughters of a district-court judge father and a politician mother, they are an all-American family -- on the surface. Behind the facade each sister has her own dark secret, and that's where their differences begin.

For Kaeleigh, she's the misplaced focus of Daddy's love, intended for a mother whose presence on the campaign trail means absence at home. All that Raeanne sees is Daddy playing a game of favourites -- and she is losing. If she has to lose, she will do it on her own terms, so she chooses drugs, alcohol, and sex.

Secrets like the ones the twins are harbouring are not meant to be kept -- from each other or anyone else. Pretty soon it's obvious that neither sister can handle it alone, and one sister must step up to save the other, but the question is -- who.

My Opinion:
This book is about identical twins who are being sexually abused by their father. This topic can be very sensitive/distressing for some people so I apologise if this review has upset you.
What I found really interesting about this book is the style of writing. It isn't written in sentences and paragraphs; it's written in a form called Verse Writing (which is similar to poetry). Honestly, when I first picked up this book I thought it was a book of poems due to the layout and structure, but when I began reading it I found it was actually a novel! I really liked this aspect, although it took a while to get used to, as it's unusual and different.

When I saw the length of this book I began to doubt it's potential. However after finishing it in a matter of days, I take that back! Identical is a very well written book and I couldn't put it down, there were some heart wrenching and  relatable scenes (I could personally relate) but many unexpected twists that left me feeling shocked and surprised (especially the one at the end!)
This isn't the sort of book I'd usually read because I prefer different genres but I did like getting an insight into how the twins dealt with it and their 'opinions' as it's something I find interesting.

Although I enjoyed the book very much I think the form/style of writing took a little getting used to and the topic was personally sensitive.
I do recommend this book, however I advise people who are over 14 to read it as there are some inappropriate/personal scenes.

Next book I'm going to review:
Throne of Glass by Sarah J. Maas

Review by Jennie Louise at 4:15 pm