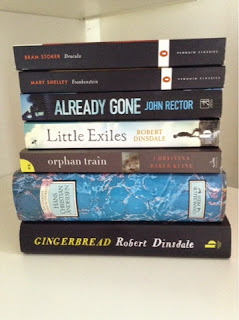 Hi guys!
Before I start, I just wanted to thank everyone for the support they've given me. I was really nervous about starting a book blog but everyone in the 'book community' has been so friendly and I've already met loads of new people so thanks for that:)

Anyway... I decided to go into town and buy a tone of new books! I had just been given my monthly wages from my job and I chose to spend them on these 7 books! Below is the synopsis of each book. If you're read it let me know what you thought of it! I will be writing reviews for each of these books as of when I read them.

Jonathan Harker is travelling to Castle Dracula to see the Transylvanian noble, Count Dracula. He is begged by locals not to go there, because on the eve of St George's Day, when the clock strikes midnight, all the evil things in the world will come full sway. But business must be done, so Jonathan makes his way to the Castle - and then his nightmare begins. His beloved wife Meena and other lost souls have fallen under the Count's horrifying spell. Dracula must be destroyed . . .

Victor Frankenstein, a Swiss scientist, has a great ambition: to create intelligent life. But when his creature first stirs, he realizes he has made a monster. A monster which, abandoned by its maker and shunned by everyone who sees it, dogs Dr Frankenstein with murder and horrors to the very ends of the earth . . .

Jake Reese is a writing teacher at an American university. He lives in a small brick Tudor close to campus with his art buyer wife, Diane. His life is quiet ? ordinary even. And he likes it that way. But it wasn't always quiet. Jake's distant past was a life on the streets, inflicting damage and suffering on more people than he can count. And now someone from his past, it seems, has come looking for him. When two men attack Jake in a parking lot and cut off his finger, he tries to dismiss it as an unlucky case of being in the wrong place at the wrong time. But when events take a more sinister turn and Diane goes missing, Jake knows he can no longer hide from the truth. As he embarks on a mission to find his wife, he realizes his dark past is refusing to stay buried and that his future is about to unfold in ways he could never have imagined.

Jon Heather, proud to be nearly nine, knows that Christmas is a time for family. But one evening in December 1948, no longer able to cope, his mother leaves him by a door, above which the legend reads Chapeltown Boys’ Home of the Children’s Crusade. Several weeks later, still certain his mother will come back, Jon finds himself on a boat set for Australia. Promised paradise, Jon soon realizes the reality of the vast Australian outback is very different; its burnished desert becoming the backdrop for a strict regime of hard work and discipline.
So begins an odyssey that will last a lifetime, as Jon Heather and his group of unlikely friends battle to make their way back home.
5: Orphan Train by Christina Baker Kline

Between 1854 and 1929, so-called orphan trains ran regularly from the cities of the East Coast to the farmlands of the Midwest, carrying thousands of abandoned children whose fates would be determined by pure luck. As a young Irish immigrant, Vivian Daly was one such child, sent by rail from New York City to an uncertain future a world away. Returning east later in life, Vivian leads a quiet, peaceful existence on the coast of Maine, the memories of her upbringing rendered a hazy blur. But in her attic, hidden in trunks, are vestiges of a turbulent past. Seventeen-year-old Molly Ayer knows that a community-service position helping an elderly widow clean out her attic is the only thing keeping her out of juvenile hall. But as Molly helps Vivian sort through her keepsakes and possessions, she discovers that she and Vivian aren’t as different as they appear.

This is pretty self explanatory...
It's just fairytales!

Frightening though it is to leave the city, the boy knows he must keep his promise  to mama: to stay by and protect his grandfather, whatever happens. Her last potent  gifts – a little wooden horse, and hunks of her homemade gingerbread – give him v  vigour. And grandfather’s magical stories help push the harsh world away. But the  driving snow, which masks the tracks of forest life, also hides a frozen history of  long-buried secrets. And as man and boy travel deeper among the trees,  grandfather’s tales begin to interweave with the shocking reality of his own past,  until soon the boy’s unbreakable promise to mama is tested in unimaginable ways.


If you have any ideas of books you think I'd enjoy, let me know! Or if you just want to chat about any of these books/what you thought of them (if you've read them) feel free to send me a message! My social network links are below:


Disclaimer: All of these books have been purchased with my own money!
Review by Jennie Louise at 11:01 pm