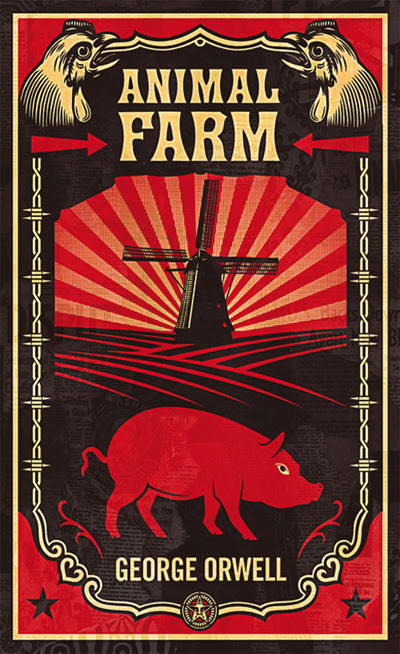 Title: Animal Farm
Author: George Orwell
Pages: 115
Genre: Political, History, Classic
Book Description:
Tired of their servitude to man, a group of farm animals revolt and establish their own society, only to be betrayed into worse servitude by their leaders, the pigs, whose slogan becomes: "All animals are equal, but some animals are more equal than others." This 1945 satire addresses the socialist/ communist philosophy of Stalin in the Soviet Union.

I really really enjoyed this book. I've been wanting to read it for such a long time now and I'm so pleased I've finally got round to it. It was actually quite a short novel so I read it in less than a week!
I think this book was really well written. I loved the story line and seeing how everything began to change and crumble. The characters were really creative and funny and I enjoyed finding out what happened to them as the story continued.

The only problem I had with this book was the amount of characters addressed on the second page. Only a few of them were really important and I found it difficult to keep up with which animal had which name etc. However this could just be me...

I knew the background of this novel before reading it; about how it was like a metaphor for the politics in Russia. I don't find politics very interested and I don't know much about it so I tried to keep this in mind as I was reading but didn't get that aspect until the end.

Linking to this, I really enjoyed the ending. It was so well written and the last quote was really powerful! A wonderful end to a wonderful book.

Overall I would recommend this to anyone. Preferably older people just because you might not understand some of the language and terms but generally it's great for all ages. I felt like I learned a lot by reading this book and everyone should read this classic at least once :)
I'm certainly going to be picking up 1984 and reading that soon!

All men are enemies. All animals are comrades

The only good human being is a dead one

All men are enemies. All animals are comrades

Next book I'm going to review:
Will Grayson Will Grayson by John Green
Review by Unknown at 2:44 pm